Here is an introduction on our permanent art works within the precincts of Dazaifu Tenmangu. 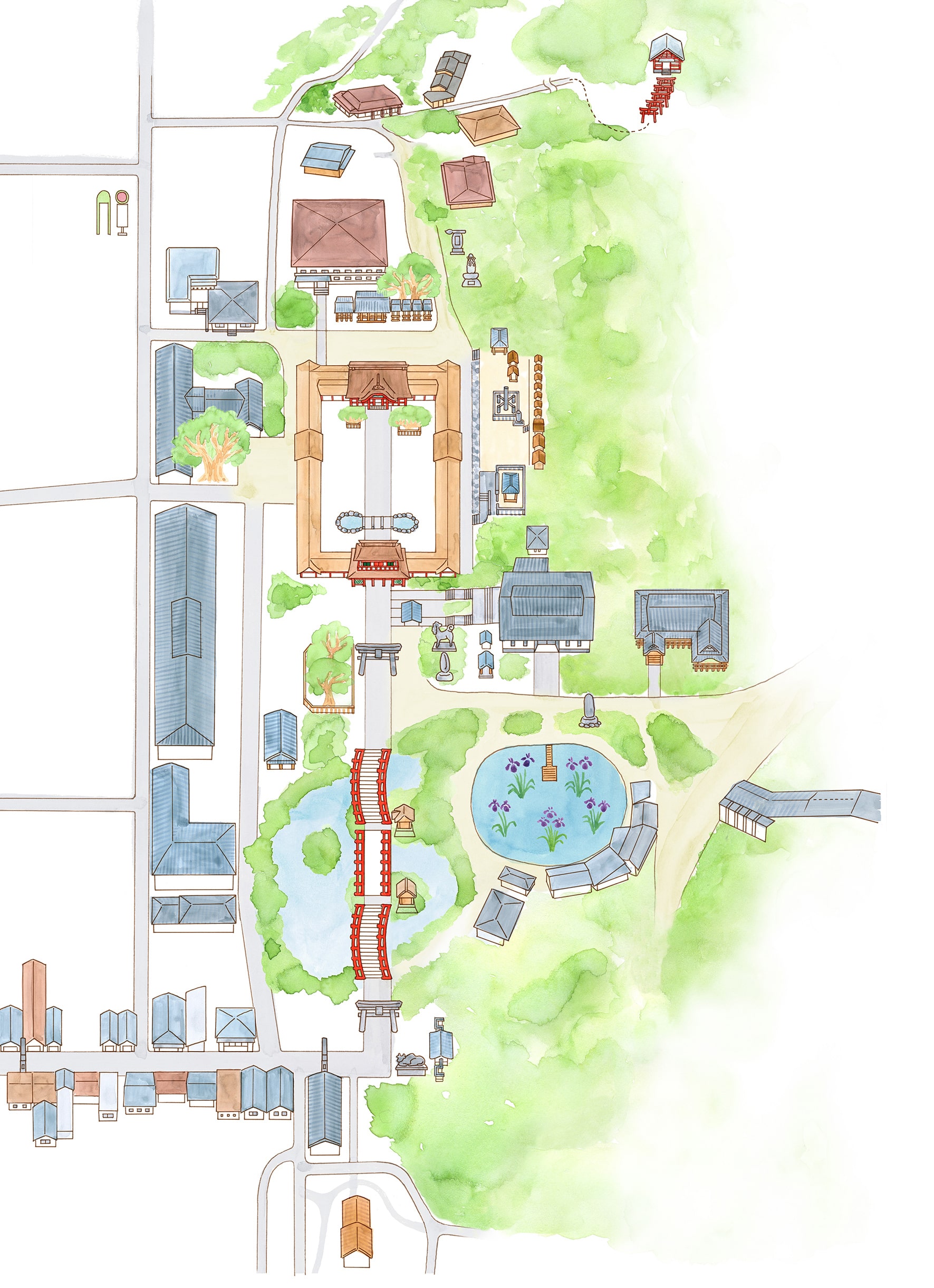 Only works that are meaningful here are born as a result of thinking about Dazaifu Tenmangu and Shinto. ‘What?’, ‘Why here?’ Please take a look at these art works with feeling of various ‘?’. 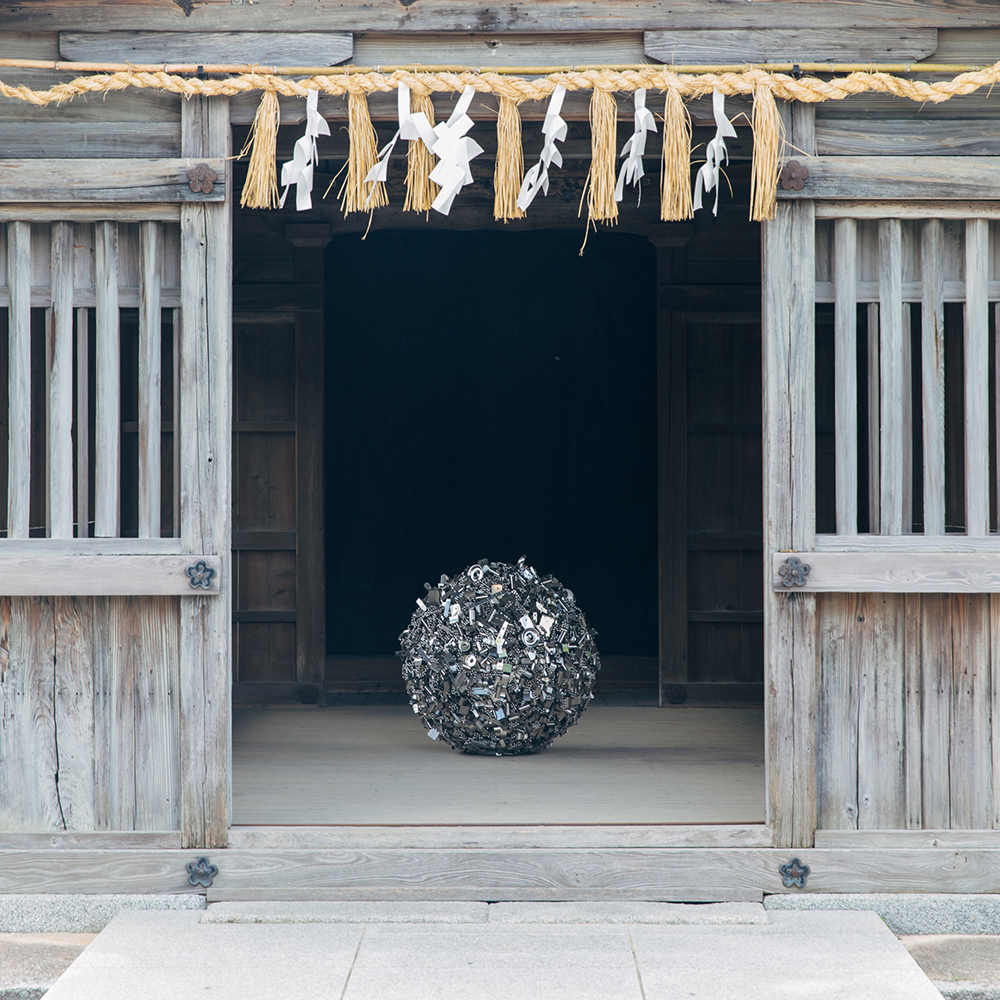 This sphere is made of countless metal scraps attracted and attached by magnets. Although it has a powerful presence, the magnetic force at its center is not visible to the eye. There’s a special meaning to viewing such a work of art that expresses the invisible nature of the core of things here at Dazaifu Tenmangu. That’s because the gods in whom we believe and to whom we pray, are not visible to our eyes. Perhaps the artist intended to convey the presence of something important that we cannot see with our eyes.
*This work may not be exhibited due to shrine events. 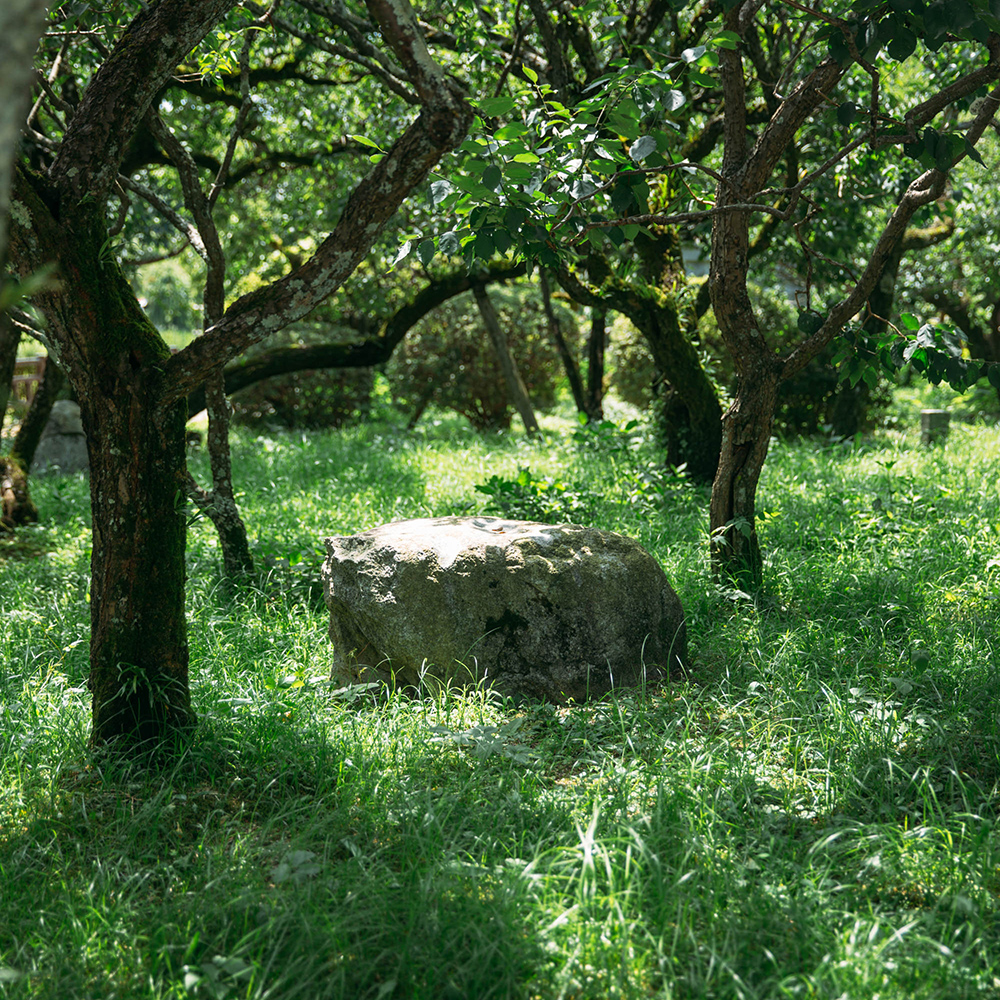 Everything is learned, VI

Now, I’d like you to consider who sat on this rock.

Can you see how the top of the rock appears worn out when viewed up close? The artist placed this rock here to convey the story of how Auguste Rodin’s “Thinker” thought so hard that the rock was worn away, and then once he understood everything he got up and left. Now that you understand the background, take another look at the rock. It really does look like the Thinker was sitting right there until just a moment ago. Doesn’t it make you start to wonder about what it was that the Thinker finally understood? 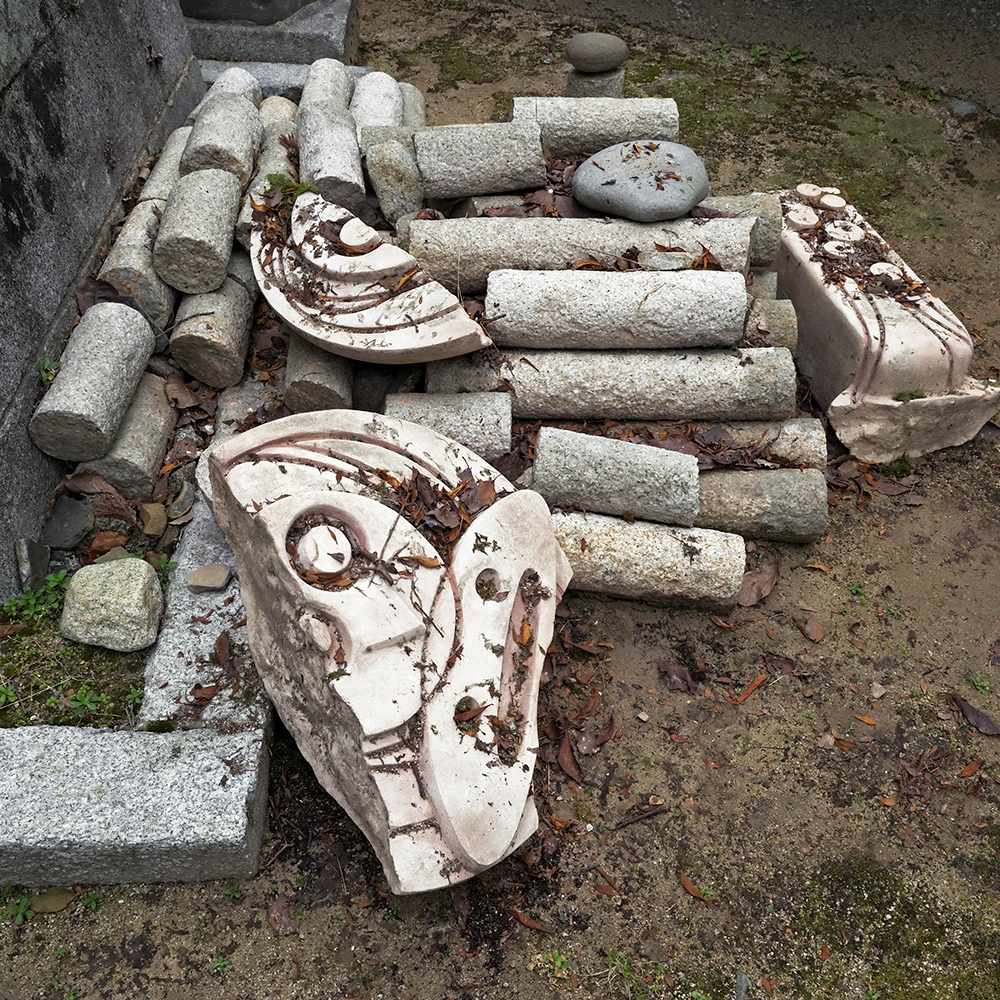 This stone pillar, now broken, was made to extoll the accomplishments of the fourth Baron of Edgerton. The Baron was a wealthy traveler who visited places all over the world. Flying his own airplane and shooting motion pictures, he was a fascinating real-life figure of the Victorian era. His additional achievement of having found the bird of paradise was in fact a fictional tale made up by an author. Isn’t it mysterious the way this fake stone pillar seems to come to life when viewed in light of this fabricated story? 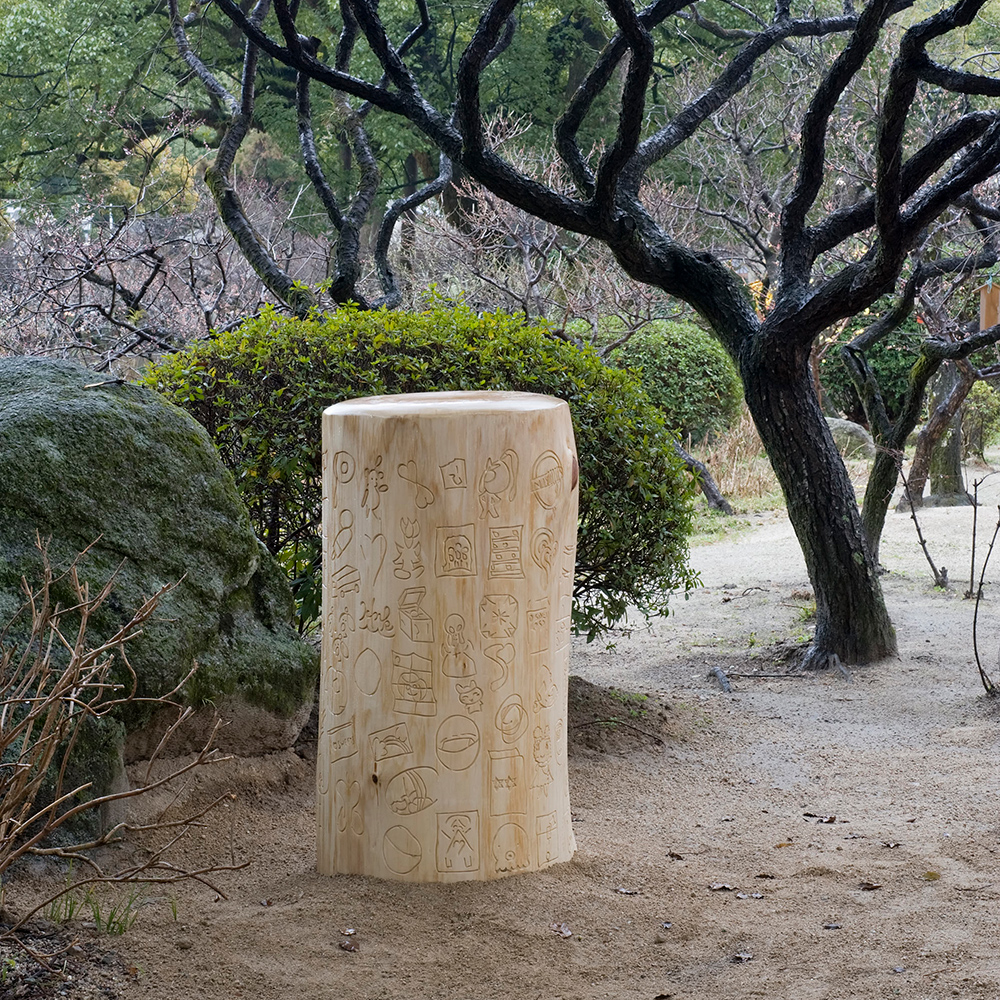 Students at the Dazaifu Tenmangu Kindergarten have buried 75 “treasures” beneath this wooden pillar. Each of the items is represented on the pillar by a carved pictogram. These treasures no longer are visible to the eye. However, the fact that we cannot see them with our eyes means that we are free to imagine the shape and background of each of them. The artist seems to be telling us that the greatest treasure of all is to stimulate the power of imagination. 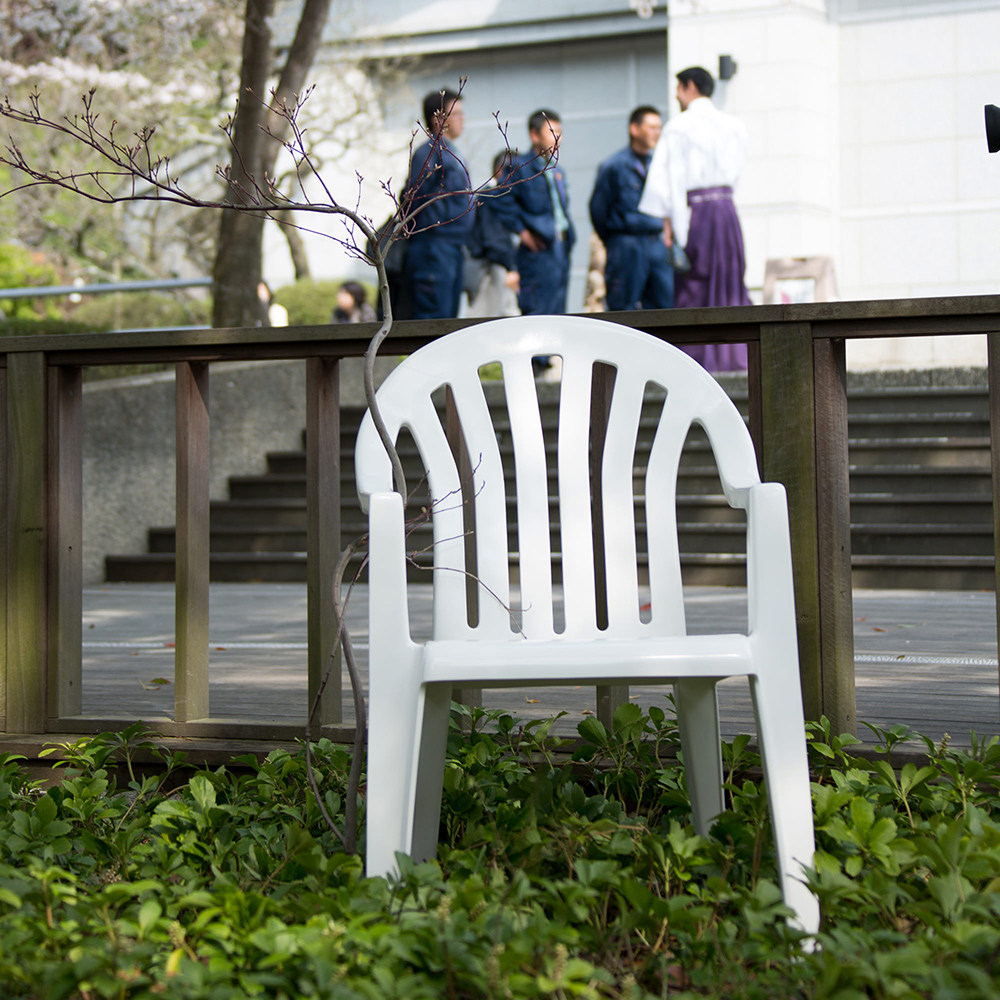 The Problem of History

Did you notice the bronze sculpture of a giraffe near this work? Once there were two giraffe sculptures here, but one of them was lost when it was requisitioned for its metal to build weapons during World War II. Incidentally, this common-looking chair actually is made of bronze! Camouflaged by its plastic coating, it seems to present a kind of mysterious worldview, as if the giraffe here originally somehow had survived. I wonder what kind of future world this bronze chair will see. 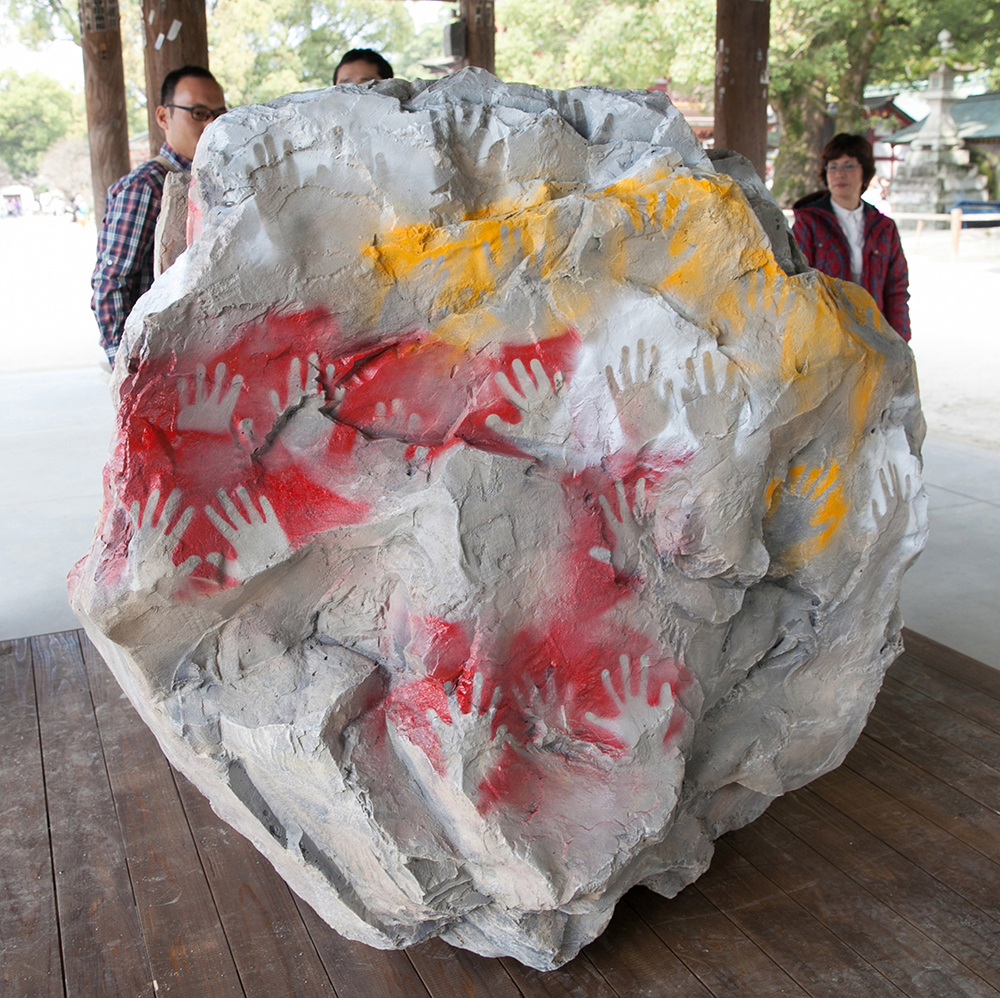 The Problem of Time

Whose handprints are these?

These are the handprints of Dazaifu Tenmangu Kindergarten students. They created this work in a performance together with the artist, using spray paint. But if you were told that they were the handprints of ancient people found in a cave, you just might believe it. The children’s handprints probably will fade over time with exposure to the wind and rain. But I wonder if people in ancient times ever imagined that we would be looking at their handprints today? It’s interesting to think about how these newly created handprints might change over time. 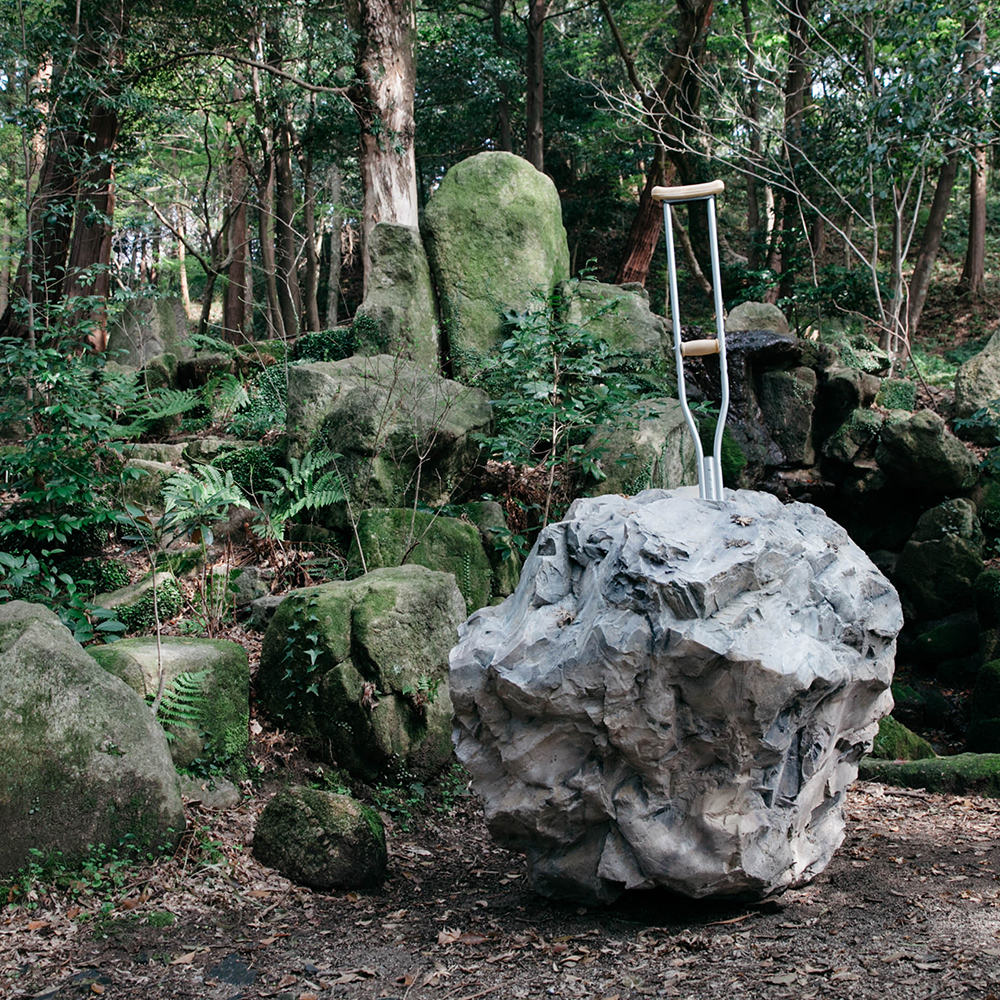 The Problem of Faith

Is that crutch embedded in the stone?

People have a very strong wish for good health, and sometimes that wish is connected to religious faith. Many people have left their crutches at the grotto of Our Lady of Lourdes in the south of France, and they seem to attract even more people there to pray. This is a fake rock made by the artist out of concrete. But if people believe, it can become a place of faith as well. The artist proposes that this may be how places of prayer developed. It’s fascinating to think about this process at Tenmangu, another place of prayer. 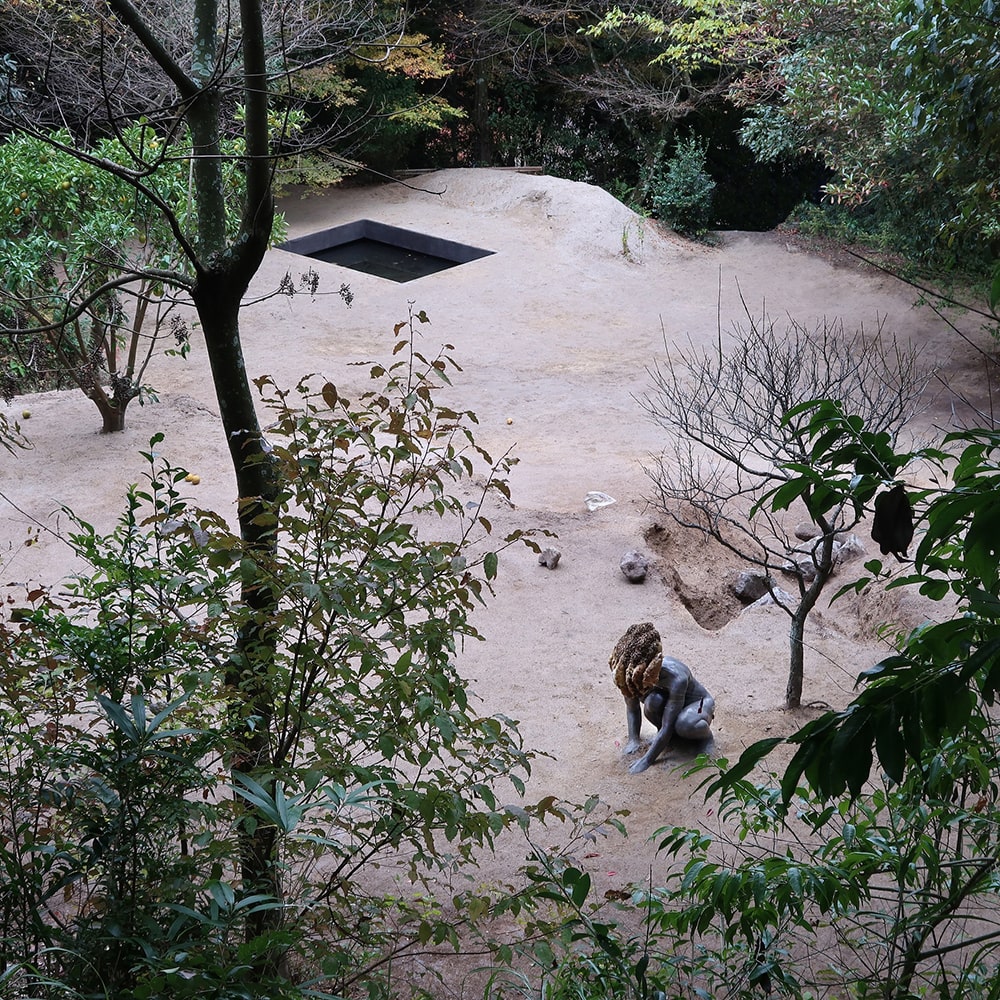 What will it be like one thousand years in the future?

The artist, who has produced a series of works on the theme of the relationship between thenatural and the artificial, created a “permanent” garden on the precincts. The garden is adornedwith a variety of elements including a sculpture of a woman whose head is covered in bees, plumtrees descended from the shrine’s sacred tobiume, or “flying plum,” tree, considered auspiciousfrom one generation to the next, and the water lilies of Monet’s pond. Unlike an exhibitionscheduled to start and end on certain dates, this garden could become a place where newecosystems form, and a site of evolution and mutations that are beyond human power to control.
*Opening dates of this work will be announced on NEWS in this website. 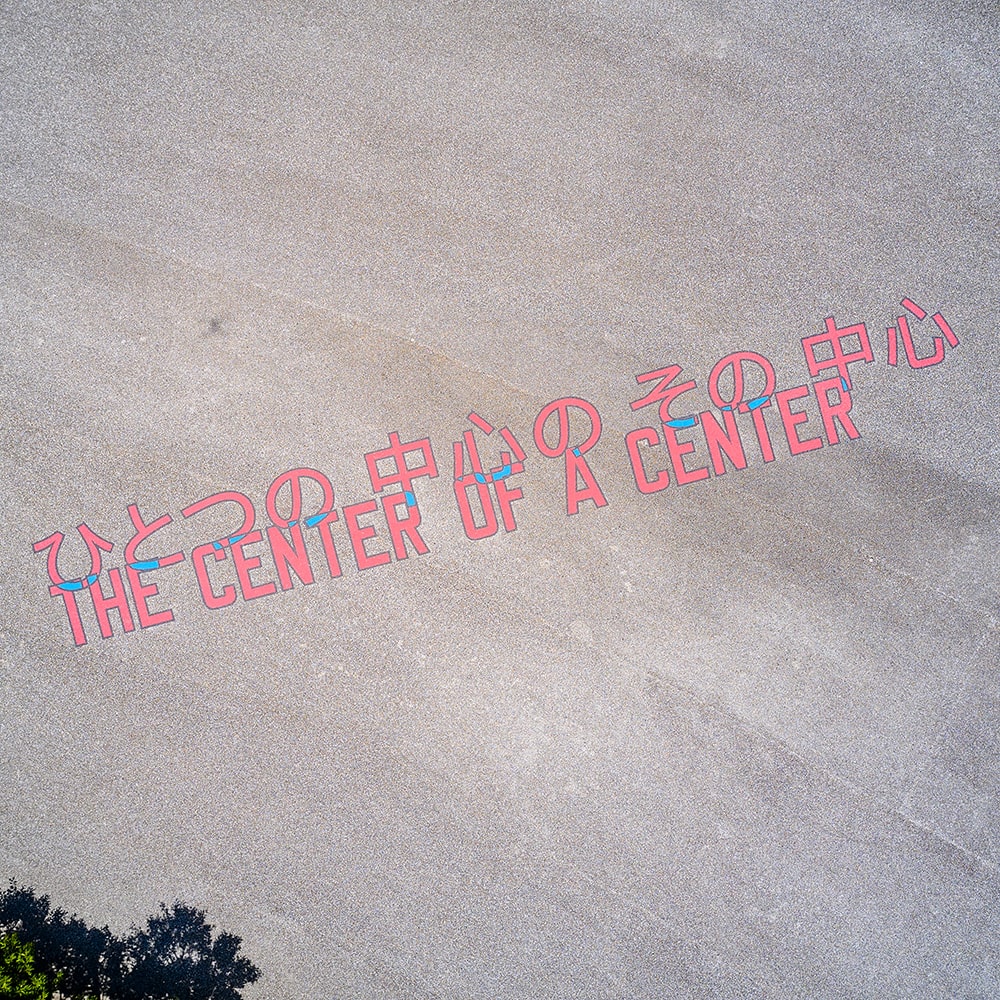 THE CENTER OF A CENTER

The center of a center?

The artist, who sees his own works as sculptures realized through combinations of words, createdthe sculpture THE CENTER OF A CENTER in a spacious area on the ground, while pondering DazaifuTenmangu. Although the deep meaning of these words may seem bewildering, the artist arguesthat the important point is to walk on the ground while thinking about the words that are writtenhere. He says that this work can mean nothing on its own but gains meaning as a work of art onceit has inspired communication between the viewer and the work. 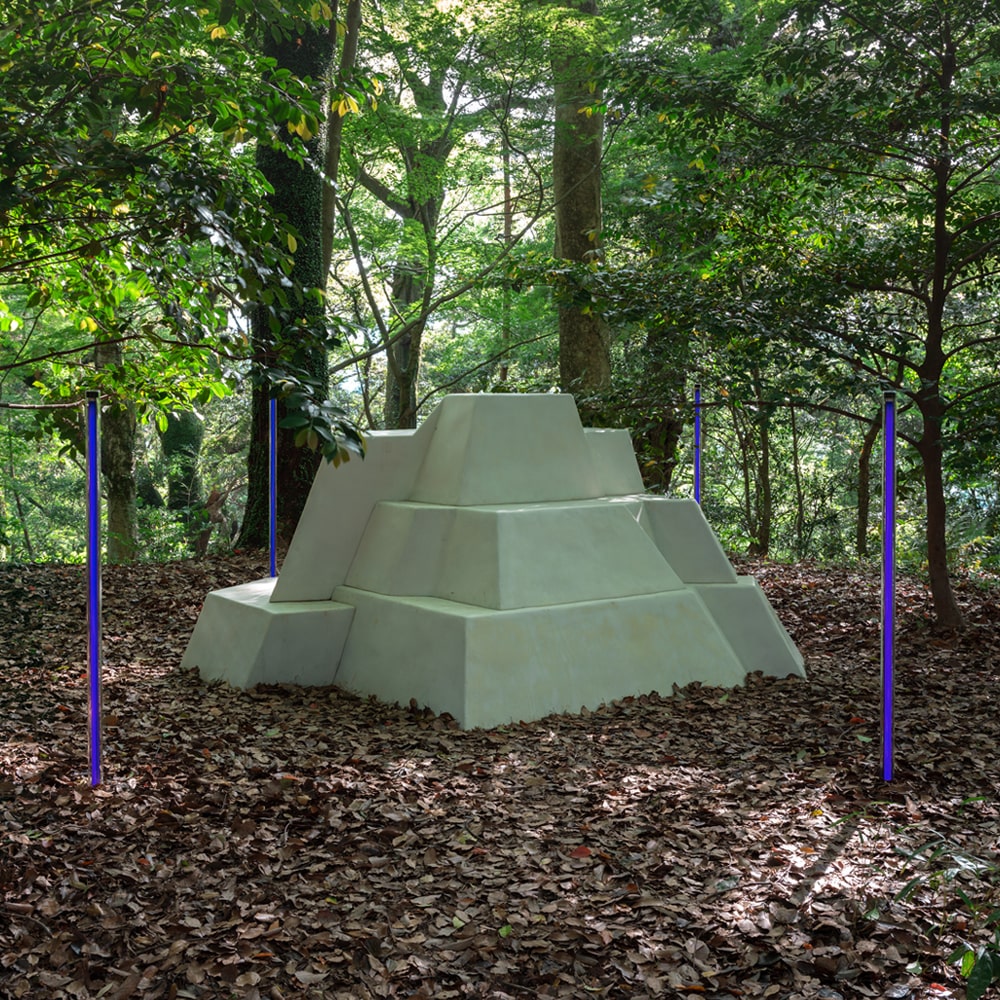 Echo and Narcissus are indispensable to each other.

“Echo” is a meditation sculpture which resembles ancient pyramid structures and sci-fi polygonal spacecraft. It is both a site and object for seated meditation. The surface of the sculpture is made using phosphorescent material, is charged with increasing energy and glows electrified like a screen during the day and actively captures light energy from a combination of sunlight and black-light, called “Narcissus”, transforming the work into a ‘charged’ object, that is visualized as glowing light even as the sun sets into night in the shrine woods. This is a sustainable piece of work that captures and circulates natural energy.
*You can sit on the artwork, but please do not climb on it with your shoes on.